Sergio Reyes, political prisoner in Chile and exiled in the U.S., was an organizer, activist, and performer in Boston for 30 years (e.g., from www.sreyes.org), several of them as a leading member of the July 26th Coalition. He moved back to Chile a few years ago and will give us his impressions of the profoundly democratic process happening over the past few years from the 2019 revolt to the rewriting of the Pinochet era constitution to the present presidential election.

Reuters, “Fact Check-Photo shows 2018 Cuba May Day march, not 2021 protests,” 14 July 2021, exposed misreporting
of “anti-government demonstration,” one of many mislabeled, misidentified photos in reporting on July 11.
What will November 15 bring?

The partial selection of posts from Walter Lippmann’s CubaNews leading up to the demonstrations being planned for Monday, November 15, in Cuba (see below) give some useful evidence of the disruptions and media war going on since the July 11 protests. Planned for the day when Cuba opens up for tourism, the new school year begins, and the IFCO/Pastors for Peace Friendship Caravan lands in Havana, they illustrate the troubling failure of many of those who previously looked with a critical eye and grasped the role of U.S. government subversion as part of its embargo/blockade (El Bloqueo) regime change policies and practices.

Two pieces from this collection in particular clarify the U.S. role in instigating these disruptions: The US Army Training Circular TC18-01 on Unconventional Warfare cited and linked in the piece on “The United States government is the true organizer and promoter of the provocation mounted for November” and the recent postings from the Cuba Money Project.        END_OF_DOCUMENT_TOKEN_TO_BE_REPLACED

Supporting Caravans Across the Country

The Boston-Cuba Solidarity Coalition is joining with our comrades, colleagues and allies in the Boston May Day Coalition and inviting the cosponsors of our recent Boston/IFCO Program to join us at another stand-in in support of Ending the Embargo on Saturday, October 30, from 1:00-2:00 at the Park St. MBTA station on Boston Common near the State House.

The rally is in solidarity with the growing Caravan movement calling for an End to the Blockade that is taking place across the country on the last Sunday of the month. For those not within close distance, local actions on the weekend are encouraged.

We’ve attended Stephen Lewis’s Cuba Poster shows in the past, covered most recently at the beginning of this year at the Walpole Library with some good examples. The October 17 mini-caravan gathering in Westborough, MA, to attend the Sunday public library exhibition demonstrates how the national End the U.S. Embargo Caravan movement is expanding in its outreach and the scope of Cuba-related occasions for delivering its message.  Stephen’s overview provides a useful overview of the showings.

A Virtual presentation and Q&A exchange for Massachusetts, Connecticut and Maine

A rally in support of Cuba’s sovereignty amidst recent demonstrations there and U.S. responses will take place Saturday, July 24 at the Park St. MBTA station at 1:00, in solidarity with the anti-embargo/blockade caravans taking place across the country on Sunday, and Monday July 26’s anniversary of the origin of the Cuban Revolution. July 24th is also a National and International Call from Brazil to be on the streets again demanding Out Bolsonaro. The open mic program is also in solidarity with Haitian self-determination in the face of the assassination of President Jovenel Moïse. The International Action Center, Massachusetts Peace Action and the Boston May Day Coalition are among the co-sponsors (full list here); other co-sponsors are welcome.

The Boston-Cuba July26.org Solidarity Coalition has signed on to the Massachusetts Peace Action Coalition Emergency Response to the Crisis in Cuba. This, the statement and basic analysis by Wisconsin Coalition to Normalize Relations with Cuba, and other recent statements amplify the analyses and commentaries in our May 31 post preceding the overwhelming condemnation of the Embargo/Blockade by the UN General Assembly last month. These recent essays include the following, Marilyn Frankenstein, Eli “Marty” Schotz, Judy Robbins, Arnold August, Walter Lippmann contributors:

Together they promote “A Vaccine Against the Virus of War Propaganda.” 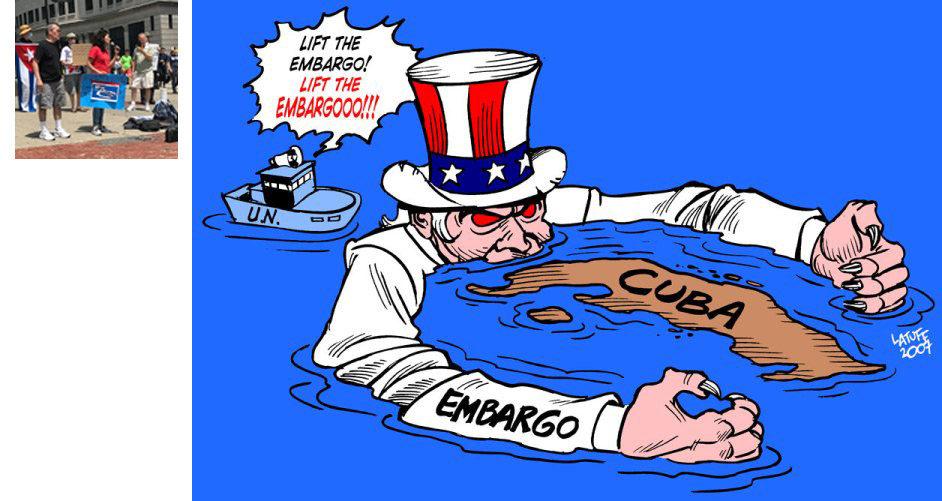 Increased disapprovals of Biden’s failure to follow-up his campaign condemnation of Trump’s oppressive Cuba sanctions and promise of a reversal are being voiced across the political spectrum. Left solidarity groups are mobilizing against the blockade with a focus on the annual overwhelming denunciation of the U.S. Embargo by the United Nations General Assembly. July 26.org is a part of these efforts.

EngageCuba.org, a broad-based, mainstream group, announced “56 groups urge the Biden-Harris administration to take immediate action to normalize U.S.-Cuba relations” back in February, as did the diversely-supported Latin America Working Group in its own press release. The libertarian Future of Freedom Foundation issued a call to “Lift the Embargo on Cuba” in March. At the end of this month, the Miami Herald published a story about how “Republican Sen. Jerry Moran hopes to lift embargo on Cuba to boost Kansas farmers”; William LeoGrande, Dean of the American University of Public Affairs, wrote asking “Will Joe Biden Continue America’s Delusional Cuba Policy?” for The National Interest, whose Center’s honorary chairman is Henry Kissinger, and another about “Hunger as a Weapon: How Biden’s Inaction Is Aggravating Cuba’s Food Crisis” for the progressive-oriented Common Dreams. Just days ago a recorded webinar on “Right to Live Without a Blockade: Impact of US sanctions on the Cuban population & women’s lives” discussed the findings of a recently released Oxfam report of the same name.

Radical, Soldarity journalistic outlets and activist groups are growing more emphatic. Witness the May 29th Resumen editorial on “Cuba: The Murderous Blockade” — the round-up of text and photos of May 30 Caravans against the Embargo from more than 70 countries, including 19 cities in the U.S.*  A good summary of it all is the basis for Medea Benjamin’s call to “Make Normalizing Relations with Cuba a Priority.” Branko Marcetic on “The US Blockade on Cuba Must End” is also a good historical analysis that explains why “blockade” rather than “embargo” is an appropriate characterization of US policy.

With leadership from US-CubaNormalization.org including the Saving Lives Campaign and the National Network on Cuba, some of the key activities taking place during the Week of Action leading up to the June 23 UN General Assembly vote include: 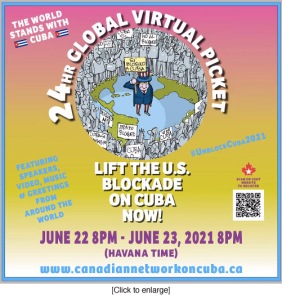 July26.org has signed onto the initiative shared with us by the NNOC co-chairs from the Alliance for Cuba Engagement and Respect (ACERE) for an organizational sign on letter addressed to the Biden administration and the new U.S. ambassador to the United Nations.

ACERE told its members, allies and supporters, “This vote is a nearly unanimous expression of solidarity with the Cuban people against the outdated and punishing policies of the United States, which have proven to lead to international condemnation of the U.S., not Cuba. We are sending President Biden a letter asking him to abstain in the vote, as his predecessor President Obama did, and to use the occasion to announce his administration’s plans in moving towards normalization with Cuba.”

The deadline for signing was Friday, May 28. The letter can be found here and includes 114 national and local sign-ons. A practically identical letter for individuals to sign onto, hosted at CODEPINK, is still open and can be found here.  Please join us.

Our major event during the week of action will be Saturday, June 19th/Juneteenth, 1:00-2:00, at the Park Street MBTA station at the corner of the Boston Commons (a Facebook event to share here). As this is Juneteenth, we’re hoping to build on the lessons from the two webinars on “Why There Are No George Floyds in Cuba” — the US-CubaNormalization Program in July 2020 and the more recent IFCO/Pastors for Peace Program this past April, both with August Nimtz, co-chair Minnesota Cuba Committee, professor of Political Science, African American and African Studies, University of Minnesota, and author of the essay by the same name. More information to follow.

A Series of Weekly Conversations

Perspectives from Havana
in a Year of Covid and Embargo

Like the rest of the world, Havana and Cuba have just completed the first full year of Covid 19. It has done so with the full force of the U.S. embargo on its neck, including additional measures enacted by the Trump administration and so far not modified or removed by the Biden administration. What has Havana been like the past year? What is it like now? What have been the major challenges and achievements?

Each week will start with a short presentation, followed by plenty of time for questions and dialogue. The discussion will be moderated by Cole Harrison (Massachusetts Peace Action), Sandra Levinson (Center for Cuban Studies), and Gloria Caballero (Latin American Solidarity Coalition of W. Mass)

Register to attend (only one registration is needed for the series). At the close of each session you will be given information and options for action to lift the Sanctions and end the Embargo, as well as ways in which you can get involved with the organizations sponsoring and co-sponsoring the series, or hold events and forums in your own community, institution or organization.
Introductions: Merri Ansara and Estéban Morales in Havana

In the face of the rush of webinars, petitions, news stories and commentaries greeting the Biden Administration’s reclamation of the Obama-Castro US-Cuba normalization efforts, we are struck by two clear reaffirmations and two complexities.

Guantanamo Prisoners / Literacy Brigadistas:  (left) Scene to promote the Rally to Close Guantánamo and Return It to Cuba, February 2018. July26.org also sponsored programs on Guantánamo in July 2016, March 2017, and May 2017. Above right, a crowd of Literacy Brigadistas as seen in the documentary “Maestra,” shown in February 2018 as part of a program with Griselda Aguilera Cabrera, who was a seven-year-old teacher in the campaign and featured in the film, one of several July26.org Literacy Campaign offerings.

GUANTÁNAMO — Returning Guantánamo to its rightful home, ending the closest and most obvious example of U.S. imperialism, and closing the U.S. prison/torture center are two clear-cut steps that we have sponsored programs on previously, that have broad-based popular support, and that can exemplify the new president’s desire for unity and to be president of us all. Last month ended with a letter published in the New York Review of Books by seven former detainees who have written books about their experience. February 12 saw the release of The Mauritanian, a film based on the 2015 memoir, Guantánamo Diary by Mohamedou Ould Salahi, one of the NYRB letter’s authors, about his experience being held for fourteen years without charge. (The film stars Jodie Foster, Tahar Rahim, Shailene Woodley, and Benedict Cumberbatch and has received two nominations at the 78th Golden Globe Awards.) During the week in between, more than 100 NGOs Called on Biden to Close Guantánamo. The recent stories of plans to close the prison have given rise to other supportive and reinforcing efforts; Veterans for Peace has set a national program “Close Guantanamo Now! A Call to Action” for 3:00 EST on Sunday, February 21.

THE CUBAN LITERACY CAMPAIGN OF 1961 — A recent posting on the US-CubaNormalization.org’s Organizers Forum provided a link to an interview, just published, with a participant in the Literacy campaign, Rosa Hernández Acosta, who was 10 years old at the time.  Another resource for this year, the 60th anniversary of the campaign, previously remembered and celebrated by the Boston-Cuba Solidarity Coalition in the film showing last September of Cuba’s iconic singer/songwriter and international recording artist, Silvio Rodriguez, who was a brigadista in the campaign at the age of 14; the February 2018 program with Griselda Aguilera Cabrera, who was a seven-year-old teacher in the campaign, one of nine women featured in “Maestra,” the award-winning documentary; and a May 2016 program featuring the Luisa Campos, Director of the Literacy Campaign Museum in Havana and of the “Si, yo puedo” Global Literacy Campaign.