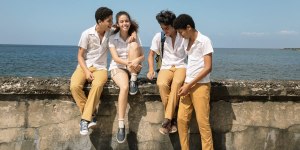 The film by director Armando Capó is about a Cuban teenager, the primary caretaker for his beloved grandmother, who develops his first crush during the summer of 1994, in the midst of the Período Especial, one of the greatest crises in the country’s history, when the collapse of the Soviet Union and the ensuing shortage of food, supplies, and electricity compel many to make the perilous journey to the US by boat. Set in the director’s rural hometown of Gibara and loosely based on his experiences, the film is not only a coming-of-age story, but also a memory of a time in the not-so-distant past that is still quite relevant today.

“Agosto” becomes available May 4th at 12:01 am EDT; viewers will have 6 days 20 hours to start watching. Once you begin, you’ll have 48 hours to finish watching the film. The May 10th 7:30 pm livestream discussion with Xiomara Hipólita Feliberty-Casiano, a Spanish language instructor at Harvard from the Caribbean who teaches a language course about Latin American cinema and literature — and who will be joined by the film’s producer, Marcela Esquivel Jiménez — is available only to ticket holders ($14) who will receive the Zoom link.

This showing is co-presented by the Boston Latino International Film Festival and Harvard’s Cuba Studies Program at the David Rockefeller Center for Latin American Studies. As posted by Walter Lippmann in CubaNews, the Minnesota Cuba Committee along with the MSP Film Society and the Cuban Film Institute highlighted their showing of “Agosto” and discussion earlier this month in their outreach for the 12th Minnesota Cuban Film Festival.

This entry was posted in Uncategorized. Bookmark the permalink.

This site uses Akismet to reduce spam. Learn how your comment data is processed.