Declaration of Observance of the 60th Anniversary of the Cuban Revolution

On Saturday, December 29th The African Awareness Association, Inc. departed from Richmond VA with a delegation of three people including Lee Robinson, Joshua Vincent, & Layla Brown on a Unity Tour from central, old and historical Havana to Regla and Guanabacoa visiting Afro-Cuban communities and their people. Observing the 60th anniversary of the Cuban Revolution and 500-year anniversary of the founding of the city of Havana, this tour enlightened, exposed, and expanded our understanding of the reality of life in Cuba and the daily realities of its people 60 year after the triumph of the revolution.

We had the opportunity to visit museums, organizations and other historical sites such as the Revolutionary Square, Museum of the Revolution, Museum of Guanabacoa which commemorates the practice of African derived religions in Cuba, social clubs and met with representatives from ICAP. What we found most notable while visiting Afro-Cuban communities is that the Cuban people are a generous, kind and resilient people in spite of the ongoing illegal, racist, and unjust embargo imposed by the United States more than 58 years ago.

We have witnessed the continued vitality of Cuban Socialism as an example of how people, when afforded autonomy, agency, and self-determination, develop necessary solutions to their pressing concerns. Cuba’s long-standing commitment to the liberation of Africans globally is well-documented, if not always well-known. Through educational exchanges with continental and diasporic Africans, preservation of African religious and cultural practices, and monuments to African contributions to the struggles of the Cuban people, it is evident that Africans globally have an Ally in the Cuban people.

Based upon our experiences traveling in Cuba, we have observed a quality of life for Cuban peoples in general and Afro-Cubans in particular that are unparalleled in so-called western or Capitalist countries. Cuban socialism has offered a viable social and economic alternative that the world must learn from. It is with this understanding we affirm and support the need to end the blockade.

On Wednesday, January 9th the African Awareness Association Delegation will return via Fort Lauderdale, Florida… We encourage all likeminded, freedom and justice loving Africans to join the next African Awareness Association Unity Tour through Santiago, Guantanamo and Havana Cuba from July 24-31, 2019. For updated information please see our website at http://www.aaa-cubatours.com. 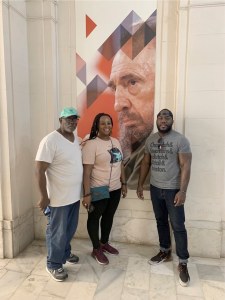