A Series of Weekly Conversations

Perspectives from Havana
in a Year of Covid and Embargo

Like the rest of the world, Havana and Cuba have just completed the first full year of Covid 19. It has done so with the full force of the U.S. embargo on its neck, including additional measures enacted by the Trump administration and so far not modified or removed by the Biden administration. What has Havana been like the past year? What is it like now? What have been the major challenges and achievements?

Each week will start with a short presentation, followed by plenty of time for questions and dialogue. The discussion will be moderated by Cole Harrison (Massachusetts Peace Action), Sandra Levinson (Center for Cuban Studies), and Gloria Caballero (Latin American Solidarity Coalition of W. Mass)

Register to attend (only one registration is needed for the series). At the close of each session you will be given information and options for action to lift the Sanctions and end the Embargo, as well as ways in which you can get involved with the organizations sponsoring and co-sponsoring the series, or hold events and forums in your own community, institution or organization.
Introductions: Merri Ansara and Estéban Morales in Havana

In the face of the rush of webinars, petitions, news stories and commentaries greeting the Biden Administration’s reclamation of the Obama-Castro US-Cuba normalization efforts, we are struck by two clear reaffirmations and two complexities.

Guantanamo Prisoners / Literacy Brigadistas:  (left) Scene to promote the Rally to Close Guantánamo and Return It to Cuba, February 2018. July26.org also sponsored programs on Guantánamo in July 2016, March 2017, and May 2017. Above right, a crowd of Literacy Brigadistas as seen in the documentary “Maestra,” shown in February 2018 as part of a program with Griselda Aguilera Cabrera, who was a seven-year-old teacher in the campaign and featured in the film, one of several July26.org Literacy Campaign offerings.

GUANTÁNAMO — Returning Guantánamo to its rightful home, ending the closest and most obvious example of U.S. imperialism, and closing the U.S. prison/torture center are two clear-cut steps that we have sponsored programs on previously, that have broad-based popular support, and that can exemplify the new president’s desire for unity and to be president of us all. Last month ended with a letter published in the New York Review of Books by seven former detainees who have written books about their experience. February 12 saw the release of The Mauritanian, a film based on the 2015 memoir, Guantánamo Diary by Mohamedou Ould Salahi, one of the NYRB letter’s authors, about his experience being held for fourteen years without charge. (The film stars Jodie Foster, Tahar Rahim, Shailene Woodley, and Benedict Cumberbatch and has received two nominations at the 78th Golden Globe Awards.) During the week in between, more than 100 NGOs Called on Biden to Close Guantánamo. The recent stories of plans to close the prison have given rise to other supportive and reinforcing efforts; Veterans for Peace has set a national program “Close Guantanamo Now! A Call to Action” for 3:00 EST on Sunday, February 21.

THE CUBAN LITERACY CAMPAIGN OF 1961 — A recent posting on the US-CubaNormalization.org’s Organizers Forum provided a link to an interview, just published, with a participant in the Literacy campaign, Rosa Hernández Acosta, who was 10 years old at the time.  Another resource for this year, the 60th anniversary of the campaign, previously remembered and celebrated by the Boston-Cuba Solidarity Coalition in the film showing last September of Cuba’s iconic singer/songwriter and international recording artist, Silvio Rodriguez, who was a brigadista in the campaign at the age of 14; the February 2018 program with Griselda Aguilera Cabrera, who was a seven-year-old teacher in the campaign, one of nine women featured in “Maestra,” the award-winning documentary; and a May 2016 program featuring the Luisa Campos, Director of the Literacy Campaign Museum in Havana and of the “Si, yo puedo” Global Literacy Campaign.

Fully accessible. For library information call 508/660-7341
A sample of the approximately 40 posters here.

Nalda Vigezzi, July26.org member, organizer and spokesperson and the longest-serving co-chair of the National Network on Cuba (nnoc.info) in its history, from 2001 until two weeks ago, was given special recognition for her service and leadership at the end of this month’s two-day online gathering. As one of five co-chairs overseeing the on-going tasks and agenda of the national organization, Nalda’s leadership can be seen at nnoc.org, an early site covering 2004 to 2010, where you will find her listed as one of the then-four co-chairs introducing NNOC’s definition, principles and goals, and more. 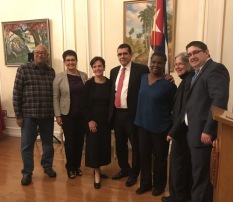 This year’s closing session included a tribute to Nalda with a collection of photos of key occasions by colleague and comrade Bill Hackwell and the note “…it is hard to think of the NNOC without you in the organizing of it. All those great statements you wrote and so much more.” Nalda intends to continue working in solidarity with the demands for Cuban sovereignty while welcoming new organizations and leadership to the NNOC.

Photos from the tribute collection and the 2019 NNOC reception.
Click to enlarge.

November 13-15 Weekend of Action Against the US Blockade

The videos of the concert and all three sessions are available here.

The international concert and three session weekend is the culminating follow-up to the March 21-22 postponement of the International Conference on Normalizing US-Cuba Relations and the organizers’ series of webinars offered throughout the Pandemic:

For more program information and registration,
here or at US-CubaNormalization.org !

On Monday October 5, 2020 the Cambridge City Council unanimously approved a Policy Order on Medical and Scientific Collaboration with Cuba that includes the call for “suspending relevant US economic and travel sanctions against Cuba.” Highlighted by leadership from long-time Cuba activist and educator Merri Ansara and Council member Dennis Carlone, the policy order focuses on the Saving Lives aspects of the collaboration.

The resolution emphasizes Cuba’s medical achievements and the need for co-operation and solidarity in combatting the world-wide pandemic; Cuban-produced drugs (Biomodulina T, Heberon Interferon Alfa 2B human recombinant, Itolizumab, and Jusvinza/CIGB 258) unavailability in the U.S. due to ongoing and increased restrictions against collaboration with and imports from Cuba; and the City’s history of medical collaboration with the island. As noted in Lee Schlenker’s article in Telesur, “Cambridge, Massachusetts Seeks Medical Cooperation with Cuba,” the City and its institutions, including Harvard, MIT and Cambridge Hospital, have a long history of direct medical and scientific exchanges of professors and students, as well as direct collaboration with Cuba, as the policy order points out. Letters from scientists such as MIT biomedical researcher Professor Jonathan King were a key part of the campaign.

With a sister city relationship in Cuba with Cienfuegos, following a January 2000 delegation led by Cambridge State Representative and Cuban-American Jarrett Barrios, the City joins the growing list of municipalities in the national campaign to pass local resolutions expressing grassroots support for US-Cuba normalization and calling for an end to the travel and trade embargo and other blockade sanctions, an effort that this year has emphasized medical collaboration in light of Cuba’s achievements in combatting the Pandemic.

According to Cambridge resident, campaign and July26.org member Marilyn Frankenstein, future plans for Cambridge include: getting more press and social media coverage; starting to put in place plans for medical collaborations between Cambridge and Cuban medical researchers; exploring other opportunities to educate about Cuba with a long range goal of organizing support for ending the blockade.

This is part of the “Honoring Cuba’s Achievements: Ending the Blockade and Saving Lives Together Campaign” that was kicked of at this year’s July 26th Celebration.  We are hoping to reach out to other cities and towns around the state.   If you’d like to help out, contact us at admin@july26.org.

For the three U.S. -Cuba Normalization Webinars being held this month:
* On Cuban trained doctors – confronting COVID-19 in Cuba, abroad and in the US
* Commemorating the 60th Anniversary of President Fidel Castro’s Historic NY Visit
* Celebrating the 60th Anniversary of the Cuban Women’s Federation and 20 years of the US Women and Cuba Collaboration
see the bottom of the Zoom Support Page.

* Interview with René González, a member of the Cuban Five who spent 13 years in a US prison and whose real life experience inspired the Netflix film The Wasp Network.                  “A very good interview.” — John Waller

* Epicentro — The blurb reads: “Epicentro is an immersive and metaphorical portrait of post-colonial, ‘utopian’ Cuba, where the 1898 explosion of the USS Maine still resonates. END_OF_DOCUMENT_TOKEN_TO_BE_REPLACED 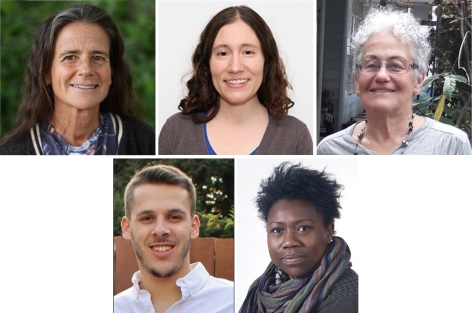 This fundraising event for Pastors for Peace combines a rescheduling of our previously postponed March PfP Caravan program, our annual July 26 Cuba Revolution Day Anniversary event, and the premiere announcement of the campaign for a Commonwealth of Massachusetts Resolution to End the Blockade and Save Lives in light of Cuba’s medical achievements in combating the Covid-19 Pandemic around the world.

For our friends and those interested in the Boston area, in Massachusetts, in Connecticut and Maine and throughout New England. Featuring:

We share the anger and outrage over the murder of George Floyd and the murders of countless other people of color by an out of control and militarized U.S. police system.  The majority of these murders have taken place without being filmed and the majority of the names we will never know.  But we do know that they were victims of an unjust and racist system.  The United States has a violent history starting with the genocide of the Native population; a people who up to the present endure racist U.S. policies in areas of economic, health, and cultural well-being.

We stand with those seeking justice in the streets and note the multi-racial, multi-age, gender diverse make-up of the protesters.  We stand with those most impacted by the unjust criminal “justice” system, the unjust economic system, and the unjust health system.  It is people of color whose communities are negatively affected by decades of environmental racism leading to poorer health, by inferior educational systems, by lack of employment opportunities, by absence of transportation, as well as the well documented policy of police brutality.

We stand with those taking to the streets and condemning the United States government policy of encouraging violence by issuing statements threatening to unleash vicious dogs, to shoot looters, telling police to “not be nice”, to use the unlimited power of the military, to encourage people to use their 2nd amendment rights, etc.

We note the moral bankruptcy of a government that professes outrage at violence resulting from centuries of racism yet supports the presence of protesters with automatic weapons in the State Capital of Michigan, that ignores the terrorist attack on the Cuban Embassy in Washington by an individual with an assault rifle who is connected to the anti-Cuban reactionaries in the U.S., and that at every opportunity dehumanizes people of color.

The whole world is watching and reacting to the ugly reality of life for people of color in the United States.  While the U.S. imposes sanctions and blockades on countries such as Cuba; it deprives its own populace of the right to a peaceful, just, and equitable society.  Compare the streets of the United States with those of Cuba.  In the U.S., streets full of police in riot gear and weapons, in Cuba streets full of medical personnel testing and caring for their neighbors.  Compare the U.S. international presence threatening, sanctioning and waging war with Cuba’s international presence of hundreds of medical workers offering healing to nearly two dozen countries combating Covid-19.

We can all do more.  It’s not enough to not be racist; we must work toward becoming anti-racist. Again, we commend the crowds in the streets across this nation and join their demands for justice for all victims of U.S. perpetrated racist abuse.